Martin Parr. Rarely does a day pass in my professional life when he isn’t mentioned by, or to me. Martin Parr, one of the world’s greatest living photographers and behemoth of photographic history. His third book The Last Resort: Photographs of New Brighton, is perhaps the most influential on my career - well, it's certainly top five. It was his first book in colour, and what a way to do it. Bam! Flicking through the pages a kaleidoscopic bulb burns straight on to the retina, it’s a saturated slap about the face. 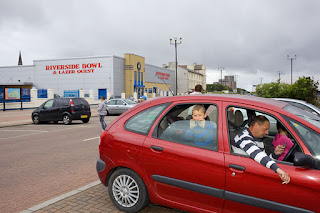 The photographs were taken in the Liverpool suburb and working class seaside resort of New Brighton over three seasons, 1983-1985. The Last Resort was published a year later - a year in which I spent my summer behind the counter of Weymouth Joke Shop selling cans of 'Instant Shit’ and ‘Heavy Drinker’ caps to Bristolians and Brummies on holiday during factory shutdown. I first saw the book aged 18 in the library of the art college where I was studying for a National Diploma in photography. It was not a book of war photographs or famine but it was Parr’s front line and one I recognized as my youth. The book was a genuine revelation that a photographer didn’t have to fly to far-flung places to photograph suffering, horror and despair; you could just get on a bus. 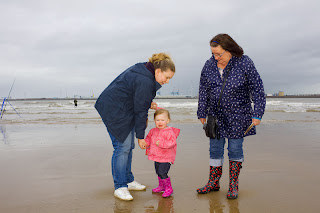 I’d like to think I would have arrived at the style of photographs I take regardless of Martin Parr, but he certainly hastened the process. Professionally his presence has sometimes been a burden; though more often that not it's been a great benefit. Whatever, I accept the influence. It is 25 years since Parr self published the first edition. The images have become as familiar to me as my own family album. As homage to the work, earlier this year I packed the 1998 edition by Dewi Lewis publishing and headed to New Brighton on a Bank Holiday Weekend photographic pilgrimage to stomp in the footsteps of Parr. 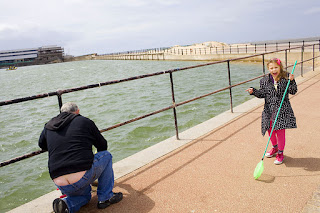 I was born beside the seaside, beside the sea; any reason to return to the coast is welcome and welcome to New Brighton. Arriving on the Wirral Line the neck hair prickled. Through habit on any coastal trip, I deployed myself straight to the seafront and stared across the River Mersey at the 30+ wind turbines that turned steadily enough to huff New Brighton away. The resorts decline was protracted. The, 'I’m bigger than Blackpool Tower' (New Brighton Tower) was dismantled in 1920, the pier finally demolished in 78’. By the time Parr arrived it was on the fringes of ruin, but it still had the open air bathing pool. A documentary photographers jackpot, the then largest open-air pool in the country provides half a dozen plates in The Last Resort. I imagined Parr photographing the Miss New Brighton pageant wearing his trademark sandals and stooping in Speedos to shoot among the tiered benches designed to seat 20,000 sun seekers in addition to 4000 bathers. Bulldozers levelled the pool in the summer of 1990 after winter storms had caused irreparable damage - well damage the council didn’t want to pay for. A replacement has finally been nodded for approval. I squinted at the size - it would embarrass the more affluent garden pond. 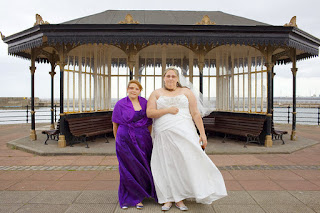 On Marine Promenade I crouched in the exact spot where Parr photographed two children dribbling ice cream in front of a weather shelter and electric blue painted railings. Since he focused the 55mm lens on that Plaubel Makina 67 rangefinder camera, the railings have been layered brown, white and black then weather whipped back through black, white, brown, to original 'Parr blue' and, in places, to green underneath. What struck me was how close he must have been - an undeniable presence. 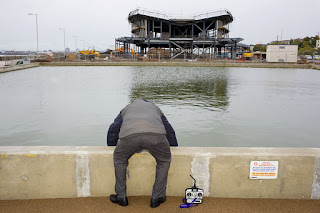 In Vale Park I knelt at the bandstand where Parr flashed for a fraction of a second in front of a woman poised in shiny pink leotard and skirt. On my visit the dancer was replaced by the Northwest Concert Band. As they tuned up, I tuned out and noticed the same bin from Parr’s shot on the parks periphery. The updated striped deckchairs still gently cradled the elderly and infirm. I snapped the scene as those able to stand for the national anthem did so. 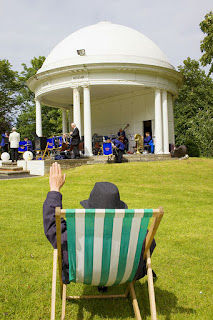 There were hundreds of cars along the Prom but where were the people? Mostly in their cars, texting on mobile phones, talking on mobile phones, reading, staring but, mostly eating. They still came to New Brighton but there’s not much to do when you get there, except walk. The 15-mile Wirral Coastal Walk, dotted with Rhubarb and Custard uniformed Lifeguards, passes through New Brighton and a dog is a good excuse to use it. I photographed the dog walkers, ice cream eaters, pigeon feeders, model boat enthusiasts and the families hooking for crabs I met along the way. I photographed outside Susie’s Ice Cream Parlour and Legends Café Bar, but was prevented from shooting in the Bright Spot Arcade. It’s impossible as a photographer familiar with The Last Resort, not to see Parr parts in every shot. Alsatian dogs, dogs with tongues hanging out, crying children, elderly women in waterproof headscarves, scattered chips on the pavement. All have succeeded in history. 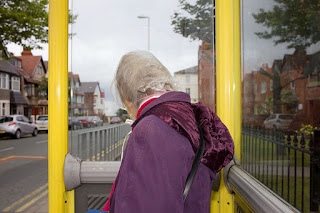 In the Queens Royal hotel, a procession of framed portraits of Miss New Brightons wearing one-piece swimsuits and knees-together sepia smiles, looked down over the wedding guests whose overfed buttocks gyrated to Lady Gaga - buttocks that would never find sepia-framed fame. I showed The Last Resort to as many locals as I could. Bridesmaid Claire was too young to remember much of old New Brighton and was uncomfortable with a stranger showing her a bright colour photograph of a naked boy balancing next to the litter strewn Marina Lake. She drank some more to forget. In The Olive Tree, Ray remembered working at Wilkie’s covered fairground 13 hours a day and the girls that would send him ‘Remember me?’ letters. He remembered days on the beach where day-trippers stood shoulder to shoulder. "Now everyone is just wider and wider,” he says wryly. None of the locals I showed The Last Resort to had heard of Martin Parr (I briefly considered moving to New Brighton). They talked more of Thatcher than of photographers. Some had seen the photographs before, they thought, somewhere, but not sure where. 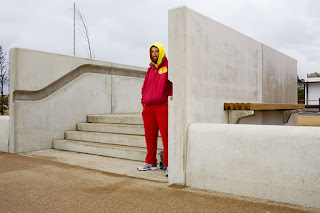 On initial publication, The Last Resort divided photographers, critics and the public alike - still does. The defining moment of colour photography or the rape of noble and traditional practice? Some thought the content sneering and cruel; others affectionate and humanistic. There was no Flickr, Facebook or TwitPic to forewarn what was to come - it just flew into our laps like a chucked can of rainbow paint. Arriving in New Brighton I expected residents to react with outrage that these types of photographs were taken and that I’d brought them back into their consciousness, but no one minded. I’d hoped to find some of the individuals photographed. Perhaps the ice cool girl in the ice cream shop married someone like Ray and now both run a pub on Victoria Parade. No one recognized the individuals in the photographs but everyone recognized a little of themselves in them. Without exception they all felt sad. Sad what New Brighton once was and, despite attempts at regeneration, would probably never be again? The Last Resort was read as simply that - the last of a proud, great seaside tradition, where Mr Punch Swazzled, “That’s the way to do it!” Where The Beatles once headlined in 1961 at the Tower Ballroom for 5d a ticket, and where Gerry and his Pacemakers belted out their anthem across the Mersey. I always read it as the last resort - the place you would least want to go. 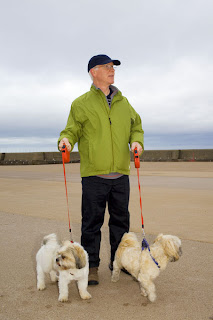 As I beat a retreat from New Brighton I too felt sad. There’s one thing the English seaside does well and that’s nostalgia. Leafing through the book my youth flickered across the pages in a visual echo of Smiths Crisps, Milky Way chocolate bars, Kwik Save carrier bags, factor two suntanned mums, prams and Pepsi cans, chip wrappers overflowing from wire rubbish bins and the cheap worn white shoes; so many white shoes. And this is what strikes me as the importance of documentary photography and film making. I’m not yet 40 and the images provoke thought and trigger memories of a past generation. This is why I will always be a photographer; to photograph what is real, to record the present in an attempt to preserve the past.
I email Parr my bank holiday snaps, he replies that he has returned to New Brighton a good few times and that it’s changed beyond all recognition: He says “Of course, now you could not shoot naked children the way I did then.” Unaware of what I can photograph today that I might not next year, I grab my camera and blink into the sunshine. It’s bright, but not quite technically brilliant dazzling New Brighton Martin Parr bright. 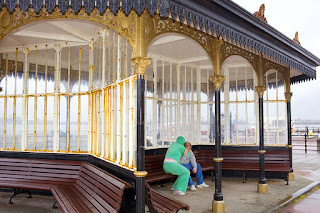 A version of this feature first appeared in issue #1 of Hungry Eye Magazine
Posted by Peter Dench at 07:02