In Conversation With Martin Parr

I am looking at cakes. There are many cakes to choose from: coffee and walnut cake, chocolate fudge cake, lemon roll, chocolate roll, even a Colin the Caterpillar cake. I ask my wife: “Which cake do you think Martin Parr would like?” “All butter Victoria sandwich!” we say in unison, a little too loudly. Martin Parr has invited me over for tea; a Parr tea if you like. I asked my Twitter followers advice on what gift to take. Cake was the winner; well that and “Something Gaddafi”. There is no Gaddafi-shaped cake.
It is 14 years since I last made the journey to Parr’s house in Bristol, where he has been resident since 1989. I first bumped into him at Royal Ascot. He’d just shot the frame that would feature in the book Think of England, of a man in a grey top hat speaking on his mobile phone next to a red telephone box; so very Parr. Two years out of university I was finding my feet as a photographer and shuffled over to say hello. After pleasantries were exchanged, he opened his wallet, gave me his card and suggested I pop over sometime.

I check Twitter again for answers to the question: "What question should I ask Martin Parr?" The response is disappointing and some suggestions simply rude. I heave the 17-page curriculum vitae I printed from Parr’s website onto the train table and begin to read. At home, when I pressed print, I nipped to the shops for a bottle of Cava, returned home and poured myself a glass; it was still printing. I make a note to plant a tree to compensate. There is also an accompanying five-page FAQ’s which I’m determined not to ask a question from. Towards the end of the journey I’m so Parred up, I’m convinced the announcement says: “We are now arriving at Martin Parr,” rather than Bath Spa. 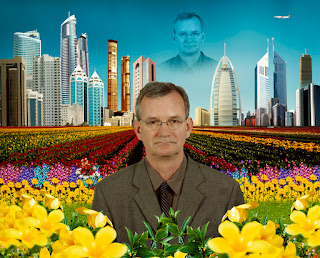 Martin Parr has so many visitors; a prepared ‘getting to’ memo arrived via email. The taxi driver asks: "Where to?" “Martin Parr’s house?” I reply. He looks blank, I give the address and read from the printout: “Along Cumberland and up Joy Hill.” I’m early so nip into the Adam and Eve pub for a glass of ‘Managers Choice.’ A fantastically gauche tray with a smiling woman beams across the customer, I suggest that would be something Martin Parr would like to collect. The manager does not respond.
Knock Knock. “Who’s there?” “It’s Peter Dench, author of the Dench Diary and contributing editor to Hungry Eye Magazine.” “Hello Peter, come in.” Casa Parr is busy. I exchange the all butter Victoria sandwich for a cup of tea with a Garibaldi biscuit and take a seat next to the glass display cabinet crammed with Obama objects and listen. The six-way chat swings from Shakespeare’s King Lear, artist Jack Vettriano (Parr is not a fan), to the use of ‘s’ instead of ‘z’ in the spelling of words.

With the guests dearly departed, we decide to check out his exhibition, Bristol and West at the M Shed; a collection featuring 60 images selected from the last 30 years of Parr’s career. Our plan is thwarted. His wife Susie, has the car and there is only one bike. It would have been nice to cycle down together. Heading up the darkened stairs I ask if Parr can turn on the light. The walls are an exhibitors feast, hung with great photographs by great photographers: Tony Ray-Jones, Paul Fusco, Garry Winogrand, Alec Soth, Josef Koudelka and my favourite, an August Sander. And that’s just one flight of stairs in the towering town house. (Parr doesn’t have any of his own work on the walls.) Entering his office is familiar; not much has changed since my first visit in 1997. I had sat on the floor under the enormous Chris Killip portrait of a boy on the shoulders of a man and showed him my work on posh schools. The verdict: “Not bad.”
Today I’ve been upgraded to a chair and sit tight as Parr flings an array of books my way and peppers me with information about what he’s up to. There’s the publication of an Australian book, No Worries; the publication of a book (by Contrasto) on the American city of Atlanta and summer show at the Atlanta High Museum of Art; another book on world beaches is in discussion. Commissions are generally booked up about six months in advance. There’s a project on sports in Minneapolis and an ongoing project in the Black Country. A show on the Scottish is ready to go. The next stage of his John Hinde project will be soon.
Parr is collaborating with Nazraeli Press to publish ten books of Argentinian photographers he has discovered. I flick through the sixth title in the popular series La Crieciente by Alejandro Chaskielberg, the photographs of a rural community living on the banks of the Parana Delta (river) are all taken during full moon with a combination of flash and torches. I can see why, by the third image in Chaskielberg’s folio, Parr was convinced of his inclusion in the series. Latin photographers are his current passion, a dehumidifier gently sucks away in the room where his burgeoning book collection on the continent resides. The books at my feet start to mount. I leaf through the much anticipated, The Latin American Photobook; the culmination of a four-year, cross-continental research effort led by Horatio Fernandez. The book presents 150 volumes; Parr was part of a committee of researchers. I set the book aside, which he thinks “charmingly indifferent”. He hopes the 12,000-plus collection of his books to be acquired by a UK museum or gallery. 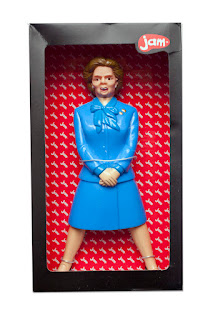 ©Martin Parr/Magnum Photos
Martin Parr gets up early to deal with internet and emails; three are inevitably from students asking for something or other. He doesn’t have an afternoon nap. He likes the odd beer or wine when it suits, but rarely during the day. He’s a big BBC Radio 4 fan and doesn’t know the brand of the clothes he is wearing. He is a nosy person and there is nothing he is not interested in, even cricket. Surprisingly, he can’t speak a foreign language. His favourite seaside town is Tenby, where he has a house. He thinks my home town of Weymouth “a great town in general”, and likes to stay on the Georgian facade that gently cradles the arcing bay. He uses a Canon 5d MKII but has never shot HD video with it. Since winning first prize at his camera club, he has never submitted work for a competition or consideration for a festival. Prizes are bestowed; inclusion in festivals requested. He never wrote a university dissertation; you didn’t have to do that sort of thing then. Martin Parr loves being a photographer and thinks it a privilege.
I take the opportunity of a lull in ratter-chatter to ask him to sign issue #1 of Hungry Eye magazine in which I wrote about my visit to New Brighton, 25 years after the town inspired his photographs for the book, The Last Resort. He signs: ‘Martin Parr was here'. I ask if I can handle his 1986 edition of The Last Resort while he signs my 1998 edition - which he does - and I ask him to sign his book Objects, which he signs: ‘To Peter, one cake = one book'. We talk about Jocelyn Bain Hogg and Marcus Bleasdale, he looks at the VII Photo Agency website for the first time and is impressed by Interrogations, by Donald Webber. Talk of internal Magnum Photos politics is off the record. He didn’t go to Philip Jones Griffiths funeral because he didn’t think it would be right. Griffiths was bitterly opposed to Parr’s membership and famously wrote a letter in which he wrote of Parr: “Let me state that I have great respect for him as the dedicated enemy of everything I believe in and, I trust, what Magnum still believes in". He refused even to speak to Parr after he was finally allowed to join.
While at the computer, I click on the link to my three-minute 19-second film on Vimeo about the War & Peace Show in Beltring, Kent. Parr chuckles; dare I say snortles. Verdict: “Not bad.” Emboldened, I click on the link to the latest Dench Diary video update where basically, my shot footage at the 59th International Ballroom Dance Championship plays along to a song about wibbly wobbly jelly sung by BBC TV Play School presenters Derek Griffiths (no relation to Philip) and Carol Chell. It seems preposterous to be stood here in Martin Parr’s office as Carol belts out: “Jelly for breakfast and jelly for tea, so wibble wobble wibble, wibble wobble wibble, wibble wobble wibble with meeeeee.” I think I detect genuine amusement and a slight wobble of the Parr noggin. 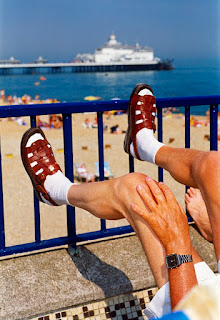 Two hours and nine minutes after arriving it is time to go, I want to go. I’ve seen more photographs in this period than I would normally in a month. My eyes throb. I find myself apologising for appearing indifferent. Parr explains how laid-back it has been and how laid-back he is in general these days. Now, I know laid-back and this is not it. One can only imagine full-throttle Parr. In fact, one doesn’t have to; it is all too evident in the work, the books, the CV and the collecting; so much collecting. His book, Objects, is not laid-back; it’s testimony to a manic collecting gene. There are Thatcher mugs plates and a spoon; Lenin and Stalin clocks; ABBA soap; Bin Laden urinal anti-splash mats. There is Spice Girl chocolate, crisp packets and body spray; a Saddam Hussein pen knife; board-games about the motorway; a Gaddafi watch; a Jesus watch; a McDonald’s watch; and trays - so many trays.
Where does the energy come from? Not the all butter Victoria sandwich that we pass unopened on the kitchen counter. Perhaps he’s more a coffee and walnut man after all. Parr calls me a cab and offers to walk me down the hill. We stop to say hello to his wife Susie, who is planting black tulip bulbs in the front garden. I wish the passionate outdoor swimmer good luck for the launch of her book, The Story of Swimming, published by Dewi Lewis. I suggest to Parr I come back in another fourteen years. “But I’ll be old then.” Exactly, then perhaps I may finally be able to keep up.
On the return train I filter what I’ve learnt through cans of Strongbow and l consider the acquired books. Instead, reach for a discarded copy of Grazia and tuck into the feature ‘What you didn’t see at fashion week'. In the morning, I click open my email and there’s one forwarded by Parr from a student at Roehampton University asking: "What is a photograph?" "What do you think the purpose of a photograph is?" and "What do you think really makes a photograph?" After two-hours and nine minutes with Martin Parr, I think I might just have an answer.