In Conversation With John Bulmer

Don McCullin is running, running as fast as he can. His mouth is open, hair neat and jacket crumpled. In his arms is an elderly woman, her thickset legs bent over McCullin’s left arm. Her gnarled right fist clenches two long sticks; wire and trees blur in the background. This unlikely couple are fleeing missiles fired into Turkish territory by the Greek army during the 1964 conflict in Cyprus. It’s McCullin’s first conflict and the now-famous war photographer is captured in action in an extraordinary black and white photograph. The previous evening, McCullin had crashed on the spare bed in the hotel room of the photograph’s author, who then drove them both into battle the following morning: “If I was going to get killed, I thought I might as well take some photographs.” The photographer is John Bulmer. 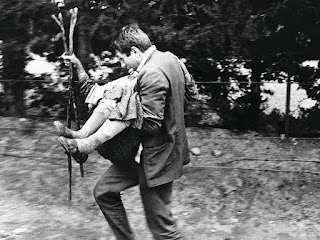 Strolling past the lake populated by pike and stopping to pull cobwebs from the bronze busts cast by his wife, the sculptor Angela Conner, on display in the grounds of his Herefordshire home (a house he bought on the telephone for £5,000 in 1965), Bulmer seems far removed from the front line. It’s 49 years since he captured that moment on an assignment for the Sunday Times (McCullin was shooting for the Observer).

Bulmer was one of the first photographers to adapt to the sudden change to using colour photography for editorial photojournalism and one of the first to be employed by the Sunday Times Magazine (STM) when it launched in 1962. The professional relationship secured him a 60-page-a-year contract and had him travel to around 100 different countries in more than a decade on the newspaper’s behalf. The magazine’s first cover featured a footballer photographed by Bulmer surrounded by pictures of Jean Shrimpton’s armpit, photographed by David Bailey, who Bulmer initially thought “a bit of a shitbag,” before swiftly mellowing his opinion of him.

This credible Doctor Who doppelgänger (more Jon Pertwee than Peter Davidson) with his ebullient frame, pince-nez spectacles and thick white hair, has the knack of being a master manipulator of time. The 75-year-old was a pioneer of colour photography ten years before Martin Parr, deliberately stalking his subjects through rain and fog with slow-responding Kodachrome and Ektachrome, well before the publication of Parr’s Bad Weather. 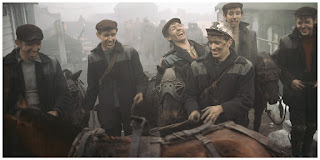 When Hunter Davies took over editorship of the STM and explained to Bulmer a change in direction of the content of the magazine to “crime, middle-class living and fashion”, he diversified into film-making where he remained embedded for the next 35 years, making documentary films for the BBC, Discovery and National Geographic television channels among others. Bulmer photographed and directed the films Fat Fiancees; Planes, Pigs, and the Price of Brides; The Witchdoctor’s New Bride and other films not featuring brides. In the film Beehives and Runaway Brides, written, photographed and directed by Bulmer for Essential TV Discovery Channel, husbands talk about the price of brides, brides gone AWOL, having several brides, forcing brides to marry and brides marrying cousins. Women with ferocious facial piercings talk about being beaten. It could be a script live and direct from the studio with Jeremy Kyle but is a matter-of-fact tale of the Sheko people living their real-life soap in the far western highlands of Ethiopia. 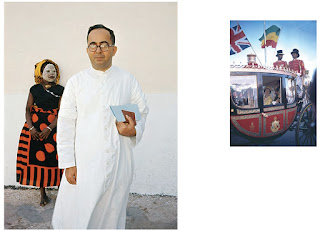 Malaria has weakened Bulmer twice and in 2005, after recovery from a tropical disease stole a year of his life, he decided it was time to hang his travel hat back on the rack and attend to his archive of stills photography. Sheltering from the afternoon rain, we each take a seat in his low-beamed office and nestle among myriad rosettes that Bulmer achieved in carriage driving, the sport that keeps him trim and his love of horses sated. The short-sighted Bulmer peers at his Apple Mac from inches away and presses a digit on the keyboard’s oversized bold black letters. The screen illuminates into life, showing life after life; more than 200 pictures from his in-progress new book were thrown down in a day into a Blurb layout. The provisional title is Other Places*, that’s places other than The North (of England), the title of his first solo monograph. 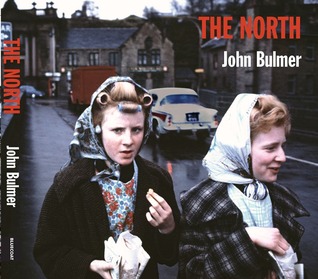 Published in 2012 by the local interest, Liverpool-based Bluecoat Press (Thames & Hudson didn’t reply to his book proposal, ditto Dewi Lewis) The North quickly sold out and it wasn’t even about the fun part of England (a 2nd edition has been published). Other publishers should have replied, the profit from the 2012 book was enough to buy a house over the telephone in 1965. The book put Bulmer firmly back on the photographic map; the north was part of the map this Herefordshire-born black sheep hadn’t witnessed before he first headed to the Lancashire town of Nelson. It’s the first town the viewer visits in the book, a town Bulmer thought as “exotic as darkest Africa.” Around 78 photographs in the 224-page book are in colour and 47 of those were shot in Manchester on commission for German Geo magazine, whose picture editor wanted him to capture the ‘swinging Manchester’ of 1976. Bulmer didn’t capture swinging Manchester; he captured empty canals and isolated pubs; cluttered corner shops; terraced houses being demolished and ravaged faces pulled taut against the elements by too-tight headscarves. When the Geo article was published, pictures from other sources had been used to complement Bulmer’s. Though annoyed at the time, he can now understand why. The quality of the printing of The North has had its critics and the criticism is valid but they miss the point. Bulmer is not a ‘look-at-me photographer’, he’s a ‘look at this’ photographer, bred from the mass circulation magazine market. All of the images have been scanned and cleaned by Bulmer and some scanned from prints when that’s all that remained.

Bulmer was sent down from Cambridge six weeks before the finals of his engineering degree, officially because “the University believed I wouldn’t pass my degree” (they would probably have been proved right, he spent more time focusing on photography) and unofficially because he had recently sold a set of pictures to Life magazine (under the alias, David Brinkman) depicting students climbing university buildings at night. The images were captured with an investigative style and starkness that Weegee would have been be proud of. The company of English photojournalist, Larry Burrows, (best known for his for his pictures of the American involvement in the Vietnam War) had already alerted Bulmer to a broader life beyond the roof of Senate House, where he had photographed a car positioned there by the prankish night climbers. Bulmer headed to London without a degree of regret and to the offices of the Daily Express where he quickly secured a job that gave him the confidence to set out and stride the globe. 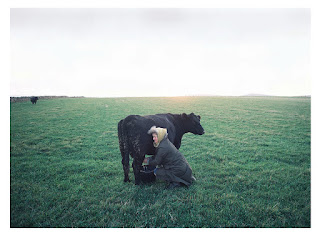 Bulmer’s Other Places are other worldly and of another time: wide-grinned Cubans smoke long fat cigars; there are half-naked Romanians who welcomed him to photograph their picnic and completely naked Germans in Romania who flung mud at his lens; there’s a shot from a bathroom in North Korea, away from his watchful minder, and mindful shots in China where he spent five days photographing without restriction after defecting there when he missed a connecting flight in Moscow en route to North Korea. Figures stare out from across the landscape of Ethiopia, his fondest country to photograph from all of his travels and one where he had to run for a mile alongside a carriage in which Queen Elizabeth II sat, head cocked, flashing her pearly whites at Ethiopian Emperor Haile Selassie. Only when the crowds had fallen back did it allow Bulmer the opportunity to shoot a clean frame, this exertion achieved while carrying four cameras, usually two Nikon’s and two Leicas, loaded with a mix of colour transparency and black and white film.

The most recent photograph Bulmer took was on his phone three days before we meet for a chat; his last photographic assignment was three years before I could talk. He checks his digital watch for the time and it’s time for wine; it’s Chilean. “A New World wine,” I declare as I tsunami the welcome taste back over my tongue. Bulmer scoffs and winces at the memory, when, in 1965, a vessel he describes a “hog’s head” holding 144 bottles of Chilean wine that he had had shipped in from the New World was accidentally smashed on the road of Elgin Crescent near his home in Notting Hill. I make a mental note to pay my respects at the disaster spot on my return to London.

As the glasses of wine are vanquished, Bulmer tells tales of sharing a darkroom with Philip Jones Griffiths during the printing of the Welsh Magnum Photographer’s opus Vietnam Inc; of infuriating the captain of the QE2 on its maiden voyage after he climbed to the top of one of the ship’s funnels to photograph her arrival into New York; he talks of his disrespect for religion and disgust for the public school system to which his cider-making father decided to send him. He remembers Travellers Cheques; receiving free first-class flights around the world; 42-hour six-stop flights to Australia; flights with no security bag checks; meeting Henri Cartier-Bresson and Eugene Smith; of missing an historical photograph of Winston Churchill as the former Prime Minister was loaded into an ambulance (Bulmer had nipped away to make a call from a telephone box). He remembers a lot but regrets little and rarely looks back. 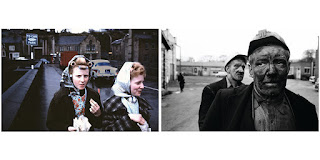 This ahead-of-his-time-traveller has always embraced change; he shot in colour when ‘traditionalists’ shied away; drank New World wine when wine was white, warm and meant for women; he used lightweight 35mm cameras while others persisted with the physically restricting Rolleiflex (with flash) and he wrote words to accompany some of his reportage features when words were meant to be the exclusive domain of writers.

We down glasses and jump into Bulmer’s TARDIS blue coloured, environmentally friendly car and smooth past the humdrum semi-detached homes of Hereford and back to the railway station where the next train home isn’t for an hour. That’s what happens when you visit the countryside. The only open and nearby place to grab a bite to eat is a fast food outlet. That’s what happens when you visit the countryside. Inside, families order their burger box and fries while a kid sweating out a viral infection cries for an overdose of Calpol. Fed, alone and thirsty, I seek the company of the Commercial pub across the road. “What would you like to drink?” asks the cherubic barmaid. There are bottles of Echo wine for £6.99 and another brand for a pound less but I ask for the only drink that can be drunk after a day like today: “I’ll have a pint of Bulmers cider, please.”

The North is published by Bluecoat Press 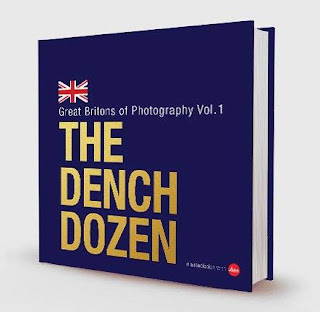