Derek, from Hull, who says he is a “good person”, doesn’t know the chunky man he is trying unsuccessfully to heave upright from the pavement. Derek is a self-confessed ‘wreck head’ and doesn’t like to leave people of any size passed out and alone on the pavement in case they get robbed. Living in Hull, I’d be surprised if Derek ever gets home at all. To be fair, the man on the pavement looks as though he has already been robbed; his feet are bare and the lack of tumescence in his pockets suggest likewise.

Derek learnt that the man was English, but failed to get his name, during a brief verbal exchange before he collapsed. Derek has decided to name the man on the pavement, Derek. “Get the F*** UP Derek!” Says Derek. Derek from Hull has no credit on his mobile phone to call 24/7, a voluntary Christian organisation that finds people who have got themselves a little messed up and helps get them back to their accommodation. As the sun reflects on to the scene from the bleach being liberally hosed around by local business employees, a group of half a dozen friends at the end of their night walk over. None of them have a phone Derek can use, or the few that admit they do, admit to not having any credit. Cars pass and splinter glass, crunching slowly away without a sideways glance from the drivers and street cleaners sweep the debris from around the sleeping giant. 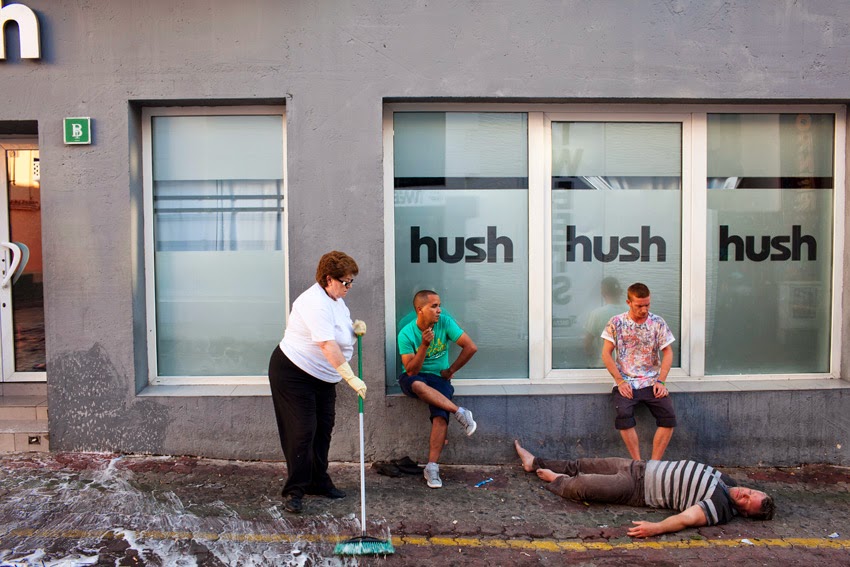 An ambulance arrives, the seen-it-all-before employees disembark with fluorescent efficiency, flicking the ends of the fingers of their patient and firmly squeezing his face. It works, and he pings to a seated right angle, and then throws up in a proffered bag before being guided in to the ambulance and sirened away. It’s not what Derek from Hull wanted, aware that the man could now be presented with a medical bill as hefty as his midriff. Derek spent his night partying at club Amnesia; it’s not one he’ll forget. Probably.

Welcome to San Antonio, Ibiza, one of five destinations I documented the British abroad during the summer 2013: Sunny Beach, Bulgaria; Ayia Napa, Cyprus; Porec, Croatia and Magaluf, Majorca completes the quintet. It’s a typical scene, echoed each summer across the party resorts of Europe. The British binge drinking followed by public order problems are reported as increasingly common in European holiday resorts. The statistics are alarming. Arrests of British citizens in Spain have increased by a third with the majority related to alcohol consumption. A recent foreign office report flagged Greece as the most dangerous place in the world for British women after more than 40 were raped in a year; the men responsible were mainly drunk British men. Binge drinking Britons regularly top the league of drunken holiday hooligans.

A lucrative industry has evolved for drinks companies and tour operators to meet the needs of Britons seeking to party abroad. Club 18-30, founded in 1970, continues to thrive exporting 110,000 guests each year with the average age of 19. The company is reported to turnover around £50 million a year. 2wentys holidays, have been enticing the thirsty Brit abroad for 25 years with promises of scorching hot clubbing holidays and the ILOVETOUR company, who market themselves as organisers of the world’s greatest sports and group tours, transport 1000’s of British students to beach party destinations. 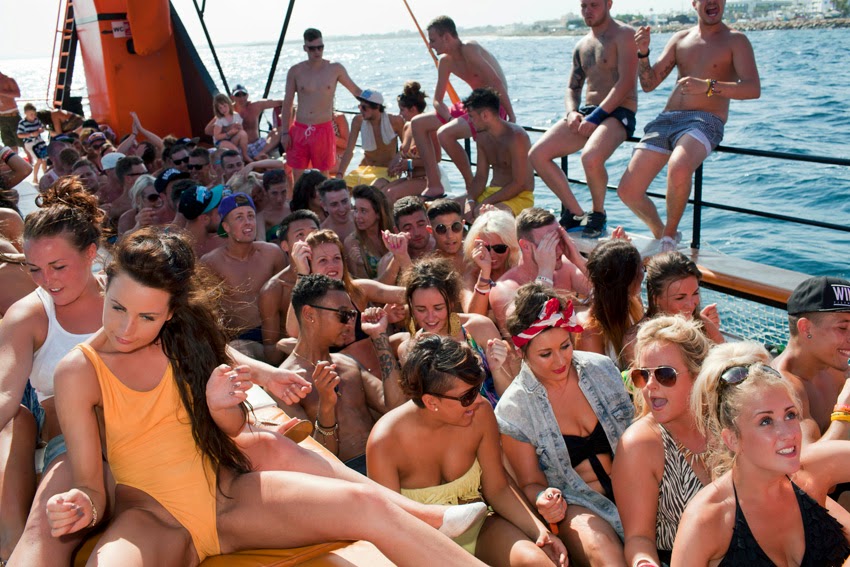 Arriving at your destination, party promoters hawk the streets selling tickets for everything the Brit abroad has come to expect; foam parties, boat parties, water parties, luminous paint parties and the holiday staple, the organised party bar crawl. Party Hard in Ayia Napa, offer a bar crawl every Tuesday that includes five bars, drinking games, free shots and free club entry. Now in it’s 5th year at Sunny Beach, the Party Crew's, Let’s Go F**king Mental bar crawl, is three times a week. Tourists can expect a welcome cocktail, five free shots, a visit to four popular party bars and two free entrances to clubs. According to Party Crew employee Ashley, Bulgarian regulations dictate the bar crawl can’t exceed 200 people and must be off the streets (and in a club) by midnight. The bar crawl doesn’t include a visit to one of the many prominent Erotic Bars, where sex is openly tendered by the bars promoters for around €55.

From the second floor balcony of my room at the Sol Trinidad hotel, Magaluf, I slowly drink a bottle of Tempranillo and watch objects from the seven floors above cascade down. There’s a plastic waste paper bin, an electric hair dryer, a pane of glass, watermelon husks, a banana skin, an apple, peanut shells and a slice of cheese. Shoes and socks (but never a pair), a bra, bottle tops and bottle bottoms, a can of deodorant, a watch, a wallet, a newspaper, myriad take-away cartons, toilet roll, a plastic fork and various yellow tinged liquids. Some items are projected or thrown, some items fall. 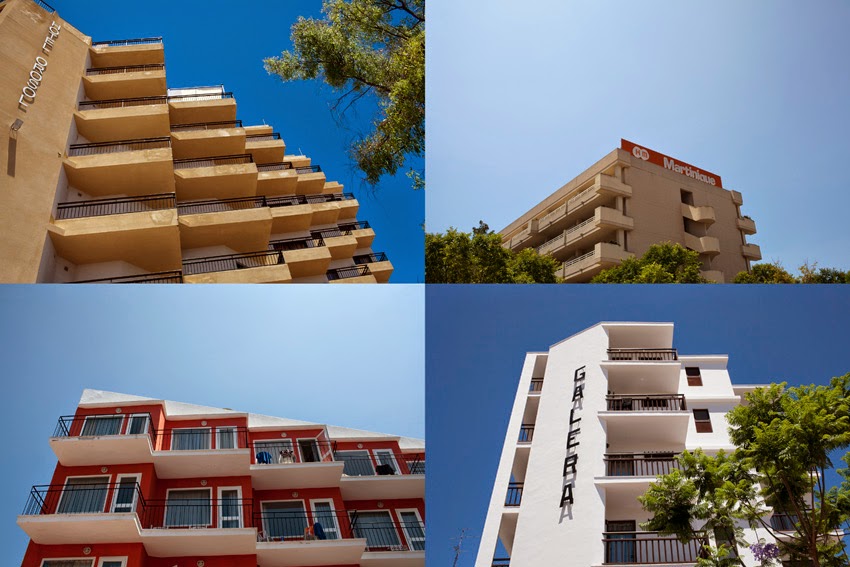 Most worryingly of all, an increasing number of people fall. In 2012, 23 year-old Daniel Geary fell about 20ft from a balcony at hotel Martinique, sustaining serious head and back injuries. 20 year-old Adam Atkinson, wasn’t so fortunate, falling to his death from a third floor balcony at the same hotel. Benjamin Harper, 28, plunged to his death from a fifth floor balcony at the four-star Sol Antillas Hotel. Charlotte Faris, 23, fell  to her death from the one-star Teix Hotel, and that’s just Magaluf. In San Antonio, Michael white, 27, died after he slipped and fell from a balcony at Hotel Orosol after leaning out to be sick. In 2011, at the adjacent Hotel Galera, Jodie Taylor, 25, died falling from the third floor after arguing with a guest from the floor above. In 2010, a short walk down the road, at the Sa Clau apartments, Andrew Warren died in hospital shortly after he fell more than 40ft from a balcony. A few days after I leave Sunny Beach, Liam Davies, 19, plummets ten floors to his death.

The main strip in Ayia Napa is flanked by games with balls you can kick and bags you can punch. Two deaf black girls search on the street for a lost earring oblivious to the speeding mopeds whose drivers swerve towards them whacking their horns. They don’t notice 19 year-old Calum, a plumber from Scotland, being jovially pushed along by friends in a wheelchair. Calum slipped on the floor where he was staying and fell through a patio door and off a first floor balcony, severing the tendons in both of his legs. Travel operator, Thomas Cook, arranged for three seats for him on the aeroplane home as Calum had travel insurance. It’s surprising how many  visitors I talk to that “couldn’t be bothered” with travel insurance. They should be very bothered, Adam Atkinson, wasn’t insured, and many thousands of Euros had to be raised to cover the cost of returning him to the UK. 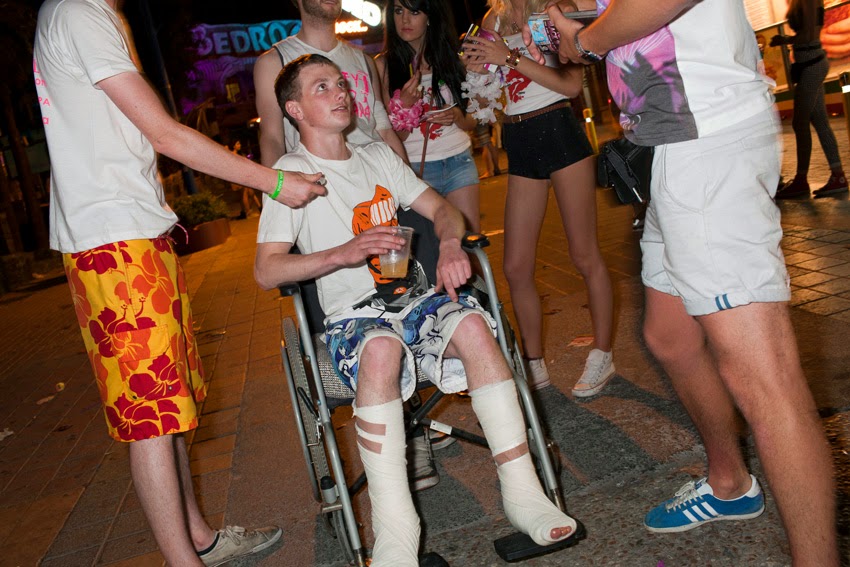 32 year-old Security Officer, George, is about to finish another nine-hour shift on the stretch of Magaluf beach he patrols alone, seven days a week, five months a year. During the night, armed with only a baton and five years experience, he had to disperse a rowdy crowd of around 20 youths trying to launch pedalos into the sea. A previous night, a Swedish tourist he interrupted being intimate with a young woman, stabbed him in his stab vest. I’m just wearing shorts and a vest, and cautiously start to photograph the British tourists slumped face down in the sand and slung limp across sun beds. They have until 6.30am before George, with the same brutal efficiency as the San Antonio medical team, starts jabbing and slapping the beach bodies awake and marching them towards their ‘can’t-quite-remember-where’ hotels. They are lucky if they still have their wallet or phone on them that George says, the dark skinned ‘looky-looky’ men, look to pinch from them during the dark. 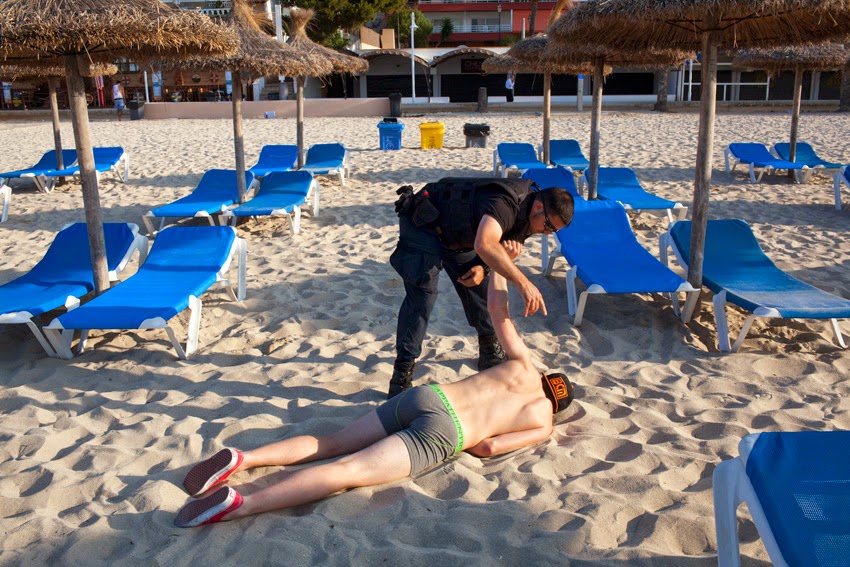 Back in San Antonio, a British father is removed from the beach on a stretcher after falling unconscious. A pale skinned man from near Manchester, recently deposited on the island by Monarch airlines, skinny-dips in the Balearic Sea. Another man washes the blood from his elbow that he thinks he split open when he smashed it through a shop window. In Ayia Napa, promoters for the ‘most popular’ strip club in town, knock on apartment doors offering a free ride to the venue and what the girls can offer off menu; “Hand jobs, blow jobs, anything you want really”. The appropriated poster girl for the venue is former British television soap opera actress and glamour model, Jennifer Ellison; I doubt she’s aware of the endorsement. The fixed grin of the unblinking omnipresent KFC Colonel rises up from the ‘finger lickin’ litter and peers down at the scenes of the pissed and the pilled-up he’s watched over for a generation, and I suspect, for many more to come.

Life can at times be limiting and disappointing. When you’ve saved up all year for a week in the sun, sometimes, all you can do as a Brit abroad, is book into a cheap hotel, fasten on your highest heels, pull up your shortest shorts (men just pull up your shorts), stick a coloured straw in a fishbowl full of Rushkinoff Vodka, turn on and up ‘Play Hard’ by David Guetta (featuring Ne-Yo and Akon), put your hands in the air, and wave them them like you just don’t F**king care, because next week you’ll be back in Wigan.
Pre Order a copy of The British Abroad hardback photo book here