Raiders of the Lost Archives

Canning Town is the most depressing place I’ve been to in London and I’ve been to the Emirates Stadium to watch Arsenal play football. It’s a place you pass through not go to. There are bus depots and taxi ranks. Underground and overground trains. Subways and bridges. The whole area is on the move. The walk to my destination is brutal and bleak. Lorries pin me to razor-wired walls. Electricity cables crackle ferociously above. There are warning signs, police sirens, guard dogs, dirt-filled pot holes, dust, discarded laughing-gas canisters, CCTV cameras, tyres, hub caps and skips. The parrot in The Durham Arms swears at passing strangers. I have a clearly printed ‘how to get here’ sheet of paper and get lost twice. Stood among the industrial units of Toolstation, Edmundson Electrical and Screwfix, there’s a clue to my destination. A man smoking a roll-up cigarette wearing a brown apron sips hot tea from a mug. On the mug it says Getty Images.

Welcome to the Hulton Archive, a remarkable visual resource of over 80 million images contained within 1500 individual collections. At the turn of the 21st Century, Getty Images merged London based Hulton Picture Collection with Archive Film and Photos, New York creating Hulton Archive. The buzzer says press firmly and await response. I fluff the firmly bit and await response. This state-of-the-art facility was around two years in the making. I push open the state of the art door and breathe in. 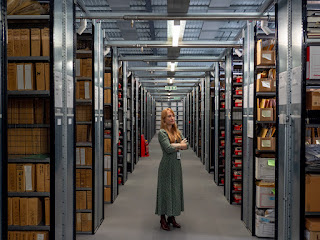 The gigantic archive is overseen by one of the world’s smallest curators. Melanie Hough is ‘five foot nothing.’ Her jaw is strong, face freckled, grip firm and blue eyes imposing. Melanie is in her thirties and third year as curator of Hulton Archive. She has been in the photography and gallery business for over a decade, working her way up after graduating from Goldsmiths University, London, with a BA (Hons) History of Art and an MA Contemporary Art Theory. Stepping onto the temperature-and- humidity controlled level one (of two) of the Hulton Archive, the scale of her task is staggering. This is what The Cloud must look like. 13 kilometres of racks and rows of boxes, packages and files. That’s 8,530 head-to-toe Melanie’s.

The heart of the Hulton collections is the seminal British weekly Picture Post magazine and it’s one of the first things you see. Melanie snaps on pair of latex gloves. “I find cotton gloves clumsy, these more dextrous,” she says, and flips to a spread by photographer Bert Hardy of 'Firefighters during the London Blitz, 1941'. From the accompanying contact sheets you can track the picture editors forensic eye and process. Another latex flip and there’s a lay out of Hardy's iconic images from the Korean War Battle of Incheon, which James Cameron wrote the article for. Between 1938 and 1957, over 9,000 articles were commissioned for Picture Post. Only 2,000 of these actually ran in the magazine and the other 7,000 were filed away. Around half a dozen photographs accompanied each published article, from the hundreds, sometimes thousands of negatives the photographers delivered, creating a colossal archive of unpublished and often unprinted images. Readership in Britain during the second world war reportedly peaked at over 80% of the population. 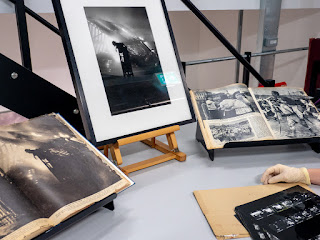 
“There are probably 200 negatives to one print in the Hulton Archive” says Melanie. “Less than 1% is online. Around 30,000 images are digitised a year with more coming in all the time.” She adds, pushing her tawny hair behind a pierced ear without an earring. It’s a job for life and the challenges are daily: researching; identifying and documenting; devising strategies for library care, accessibility and conservation; acting as spokesperson; leading tours of the archive; assisting external researchers, scholars and curators find what they didn’t know they were looking for. She even handles the Instagram account @Gettyarchive. Melanie is always busy during the day and often kept awake at night. Terrors include: reticulated negatives (the distortion of the emulsion layer of a film); indecipherable index codes; problems with original and now inappropriate captions and the most horrifying of all, off-gassing, film that is actively decaying, often known as vinegar syndrome as the film begins to release acetic acid, as you’d find in the vinegar doused over chips. The process cannot be recovered, only stabilised. We both rapidly sniff the room. My stomach starts to rumble. 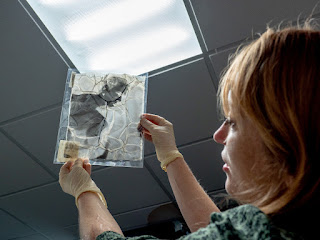 
During my tour of the archive, one of Meanie’s two curatorial assistants ghosts past, triggering on the strip lights. A herculean librarian who has been working at the archive for 20 years and spends their entire time meticulously patrolling the racks, rewriting faded labels and refiling requested material - requests that often mirror what is happening in the modern world. Demands this month are for women playing football (the FIFA Women’s World Cup is currently under way) and images of D-Day in this 75th anniversary year. Images of royals and British royals in particular are among the most popular genre.

Melanie has a shifting top 10 of her favourite photographs. Among them an image by renowned photojournalist, Terry Fincher (pretty much every photographer in here is renowned): a scene of Carravaggion-quality captured on 35mm film of Marine chaplain Eli Tavesian giving communion to marine Louis A Loya, at Forward Command Post in Hue, Vietnam, 1968. It’s also a favourite of the Archive Vice President and Melanie’s boss, Matthew Butson. It was to Matt that Fincher (one of the many photographers he knew personally), confessed to shooting the image from the hip - it still didn’t need cropping. A John Chillingworth image is another of Melanie’s favourites: a controlled test reveals the frightening speed with which clothes can catch fire, published in Picture Post alongside the article, 10 Seconds Can Mar A Life, 1953. 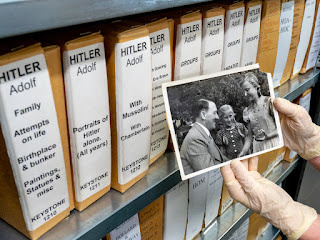 
History is democratic: boxes of prints of comedian and actor Benny Hill alphabetically align alongside those of Adolf Hitler. History is also fluid, a tide. No ones place in it is guaranteed. There are gatekeepers, authors, editors and curators who prioritise what’s important and champion some photographers over others. Melanie understands and welcomes that the findings and decisions of the team of ‘Hultonites’ at the London facility (including five editors, four in scanning and an on-site conservator whose job is to stabilise and repair) can be challenged or changed as new, old archives are opened and verified. 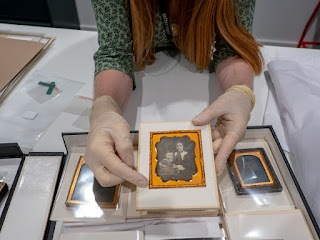 
The doyens of photography at Hulton Archive are resident in Melanie’s favourite room, the Vintage Room. One of only five people with access, she fobs us into the windowless space, the walls lined with Brassaï, Bill Brandt and Lewis Carroll. She delivers to the viewing table the book: Illustrations to Tennyson’s Idylls of the King and Other Poems by Julia Margaret Cameron, one of only eight known copies in the world. Other lifted lids reveal hermetically sealed stereo Daguerrotypes (a photograph taken by an early photographic process employing an iodine-sensitized silvered plate and mercury vapour), Ambrotypes (a positive photograph on glass made by a variant of the wet plate collodion process) and Calotypes (an early photographic process introduced in 1841 by William Henry Fox Talbot, using paper coated with silver iodide). There’s an order of service from Ronald Kray’s funeral; a 1738 letter from Louis XV of France (the most beloved Louis); a 3-D stereoscopic of the moon and marking the 200th anniversary of the birth of Queen Victoria, one of the latest discoveries from the archive files. Believed to be the earliest image of any British monarch by a woman photographer, the portrait was captured by Frances Sally Day (c1816-92), possibly on 26th July 1859, according to Victoria’s own journals. We respectfully whisper our conversation across her royal highness. 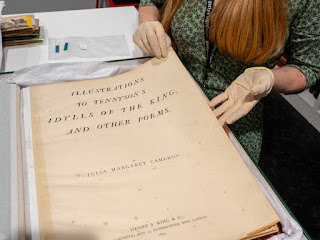 
Melanie ends by showing an image by Eadweard Muybridge (1830-19040, the English-American photographer important for his pioneering work in photographic studies of motion. He’s arguably best known for shooting and killing his wife's lover, a crime for which he was acquitted in a jury trial on the grounds of justifiable homicide. It’s been an overwhelming and dramatic three hours. I feel guilty for only glimpsing a fraction on offer at this analogue centre of excellence. Melanie half-jokingly suggests checking my bag on the way out. I suppress my inner Indian Jones (Raiders of the Lost Archive?). In truth, I don’t want to steal anything, I want to leave something and consider slipping a folio of my images onto the shelf.

The Wiltshire-born, Devon raised lass, who hates being photographed and is driven by what she is yet to see, has to go. She softly guides me back into the open and I stride deeper into the drizzle. “We didn’t even make it to the Man Ray’s!” She shouts. 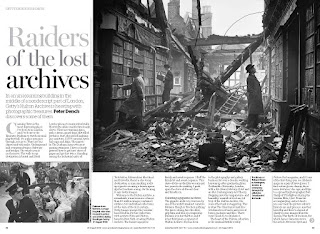 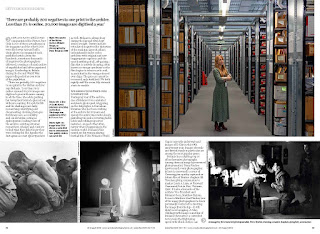 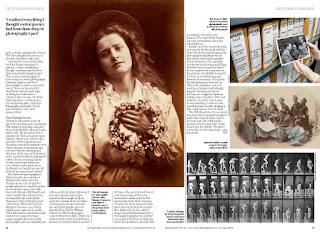