The Year Of Living Dangerously

An independent gallery located at the top of a period building in Cardiff is showcasing some of the most exciting contemporary photography in the UK. On its first birthday Peter Dench catches up with the owners of the Third Floor Gallery to discover if it really is tough at the top. 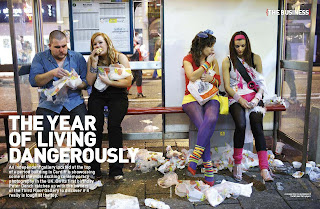 Maciej Dacowicz is not comfortable. He presses a splayed hand hard into his face and rubs. It’s not the disco ball lights peppering his face that is causing distress. It’s the questions. Maciej doesn’t like questions and doesn’t like to answer them; in fact he doesn’t like to talk much at all. We are at the Third Floor Gallery in Cardiff that he launched with Joni Karanka (Bartosz Nowicki joined some months later). Today is the gallery’s first year anniversary party. I ask Maciej (pronounced mach-ic) what he enjoys about running the TFG, he rubs harder, “Ask Joni.” I’d arrived a few hours earlier. Approaching the gallery Joni and Maciej had parked up outside with a car boot full of beer. It had taken them three hours to choose it checking for the best deals. “Give us a hand Peter,” no one is beyond being asked to help and we take turns to deliver the crates up the 60 stairs past an Indian Dance Class and Taxi Rank to the top-floor premises. 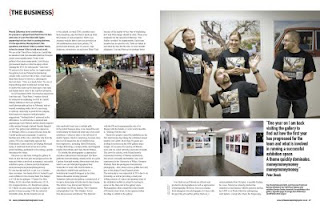 On the 22nd December 2009 I received an email from Joni that said; ‘Dear Peter, I wander if you’d be interested in exhibiting LoveUK in Cardiff. Maciej Dakowicz and I are opening a small photography gallery in February, and we wanted something with a bit of a nice bang to open up. Any reply is good for me, ranging from interest to rejection with alternative suggestions J.’ Feeling festive I answered in the affirmative. A call from the considered and unassuming Joni followed and the details required softly spoken through a Finnish, Spanish hybrid accent. The gallery and exhibition opened on the 12th February 2010 to a warm welcome from the Cardiff media and community. Located in the Bay area of Cardiff a short bus ride from the centre, TFG sits comfortably opposite the Millennium Centre and developing Mermaid Quay. A sandwich board at the door of the period building, padlocked to the railings quietly introduces the venue. 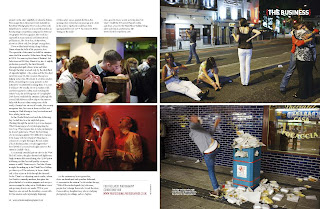 One year on I am back visiting the gallery to find out how the first year has progressed for the team and what is involved in running a successful exhibition space. A theme quickly dominates, moneymoneymoneymoneymoneymoney. No one has any and how to get it is a constant time consumer. Joni heads down to Iceland to get some nibbles for the evening bash. The budget is £7-8 but he splurges. 75 piece Tex Max Platter, £4. 36; Chocolate Strawberries, £2; 14 Filo Wrapped Prawns, £2; Blackforest Gateau, £3. I throw in some crisps and buy a couple of pasties to keep us going. TFG has achieved charitable status but the benefits are yet to be realised. Around £700 a month comes from donations, any shortfall is made up from the pockets of each proprietor. There is an Amazon well wishers list that to date has provided an A4 Multifunction Mono Laser Printer, TV, professional trimmer, pair of scissors, tape dispenser, screwdriver set and some white tack (the sandwich board was a wish list gift). In the initial business plan, it was hoped the rent would largely be funded by print sales from each exhibition. Collective sales so far fall short of double figures, this is surprising, since the LoveUK launch the list of exhibitors have been impressive including David Solomons, Jocelyn Bain Hogg, Carolyn Drake, and Magnum royalty David Hurn and Chris Steele-Perkins.

To exhibit, the photographer is approached and direct submissions discouraged. The three gallerists chat informally, usually in the £2-a-pint Captain Scott pub nearby about what work they want to see and what photographers they would like to work with. Volunteers lubricate the gallery, a central pool of around a dozen help with the day-to-day running. This allows Joni, Maciej and Bartosz to concentrate on off-site matters. The volunteers call ponytailed Joni ‘The Thinker’ for his Zen like presence and Maciej ‘The Director,’ because of his matter of fact way of explaining how and when things should be done. There is no nickname for the open faced Bartosz, ‘The Smiler’ wouldn’t be inappropriate. Each team member has no specific role. Tasks are taken as and when by who has the time or most suitable allegiance. Joni and Bartosz are perhaps better with the PR and communication side of it. Maciej with the details, or as he would describe it, “Dealing with the shit.”

Thirty-five people visited the exhibition on the first anniversary day, taking the estimated annual number to over 4000. 50+ guests are jostling for position in the 60ft Sq gallery space tonight. It’s an open-door policy, invites were sent via social networks and word of mouth. The crowd is eclectic with Poland heavily represented courtesy of Maciej and Bartosz. The mood is friendly and familiar. Also well represented is the University of Wales, Newport. Students from the prestigious Documentary Photography – BA (HONS) course gobble beer and peer at the pinned Laura Pannack prints. The University is very important to TFG. It’s proximity, as well as providing a ready and willing rotation of visitors print some of the exhibitions in return for having their name on the fliers and in the gallery space. Photographers often consult the course leader at Newport, Ken Grant, for his opinion before deciding to exhibit at the gallery.

Joni, Bartosz and Maciej are all keen and productive photographers as well as appreciators of photography. However, Joni is on hiatus from taking his own photographs, too busy with his paid day job and the gallery. Bartosz, a recent graduate from Newport is quickly finding his voice. Maciej has already pinched the industries consciousness with his pictures and has his 5000 or so Flickr followers anticipating each update. Cardiff After Dark, his burgeoning project on the city’s nightlife is where he thrives. Five images over four pages from the project were included in the Street Photography Now book and the work helped him to achieve an honourable mention in the reportage competition for National Geographic Polska magazine for Polish National Geographic. His work has appeared in many national and international publications, The Guardian, Independent, American Photo and Der Spiegel among them.

I have walked with Maciej along St Mary Street where the bulk of his project is shot. The spectacle of the street has held his attention since the Pole moved to Wales from Hong Kong in 2004. I’ve seen my fair share of Britain’s bad behaviour and St Mary Street is top ten. A nightly production penned by the devil himself, choreographed girls shiver, totter and titter through the litter warmed only by the click flick of cigarette lighters - the Police and the bloodied never far away. On this occasion Maciej was fidgety in his skin. He admits to a lull in creative libido, researching too many pictures on the Internet to be interested in taking them. I’m sure it will pass. He usually shoots in tandem with another snapper for safety, each watching the others back, the imbibing stars of Cardiff After Dark haven’t relished the attention (although the council did deliver a yellow skip to the street to help with the mess after seeing some of the work). Certain bars are out of bounds, the security recognises him, his name is down and he’s not coming in. I left Maciej at 3am; he stuck around for a while, just in case.

In The Claude Hotel over lunch the following day I asked him how his night went. Clicking through the results I spot some keepers. What Maciej enjoys about photographing he won’t say. What inspires him to take photographs he doesn’t quite know. What’s the best thing about running a gallery? It’s difficult to explain. Is he happy with his situation? Stopping on a frame of a couple kissing in the rain under a black leather jacket, I would suggest that for 1/200th of a second each night spent on the street in Cardiff - he is.

At a recently attended private view in the West End of London, the glass-fronted and lighthouse bright interior felt intimidating, the thousand pound prints inhibiting and the bar staff prickly on repeat returns to refill. There wasn’t a Tex Mex Platter in sight. Bounding up to the Third floor Gallery you know you’ll be welcome, to have a drink and a chat or just to look through the donated books. There’s an adjoining artist studio where Ian Smith is currently resident that gives the place a feel of a work in progress and one you are encouraged to take part in. Exhibitions come and go every four to six weeks. TFG is your friend, an arm around the shoulder, a social club for the creative and surprisingly forgiving. At the party I see an ejected fist from the opening show event that one-year ago put a hole in the wall so big it could have been appropriated for use on TV by Anton Du Beke, “Bring on the wall!” As the anniversary hour approaches, shots are distributed and speeches delivered. A comment in the visitors' book catches the eye, "With all the technologicel (sic) advances, people don't change that much. Loved the show. Came with my daughter Amy who is studying photography in college, and is a big fan. Also, good to know you're not only alive but vital." I sniff the 50% proof Finnish vodka and down a toast to the Third Floor Gallery being alive and vital in another year.

A version of this feature first appeared in the April 2011 issue of Professional Photographer Magazine
Posted by Peter Dench at 07:01