When we heard that three Middlesex University Students had won place in the National Portrait Gallery as part of the Taylor Wessing Photographic Portrait Prize exhibition we wanted to know more. More than a decade ago photojournalist Peter Dench graduated with a first-class degree in photography but no idea how to make a living, so we sent him back to school to see how today's photography students are being prepared for the real world. 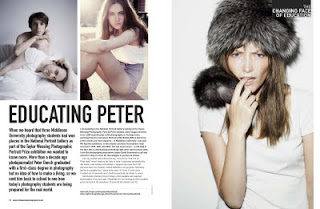 I am standing in the National Portrait Gallery looking at the Taylor Wessing Photographic Portrait Prize exhibits. 60 images selected from 6000 submitted by 2400 photographers. Perhaps more startling than the tumescent My British Wife is three of the entries are from students. Students of Middlesex University (MU). Last year they had two exhibitors. In the awards previous incarnations I had success in 1999, 2001 and 2003. The last seven years a cold slap in the face. MU are clearly doing something right and I want to know what. I give BA Photography Programme Leader David Simmonds a call and enrol for a day. It’s time for this snapper to go back to school, Educating Peter, the sequel.

Like any student before their first day I’m nervous. Will I fit in? What shall I wear? Jump on the tube to leafy Cockfosters and ponder the day ahead, a day talking with students. I suppress my inner Paul Calf and scan the Metro for research; Gillian McKeith is not pregnant, Morrisey’s been a naughty boy. I pause at the gates. It’s been 15 years since I walked out of University and I momentarily doubt my ability to return. 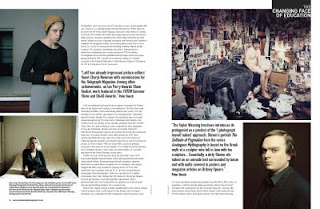 David strides forward, Royal College of Art Graduate and respected photographer in his own right. Thankfully he’s not wearing an elbow padded jacket and cravat. He introduces 26 year-old BA student, Asef Ali Mohammad. Asef was given a brief to produce a series of photographs that use ‘America’ as a starting point to the creative process. While others in his year took off to the studio flinging cream pies at the statue of liberty, Asef took off to Kabul. MU didn’t discourage him and advised he text his daily progress. Foreign communications often being what they are, they weren’t always received. While concerned, staff trusted Asef’s ability to complete the assignment safely. His resulting Photo Essay ‘Stories From Kabul’ is a series of colour portraits featuring ordinary Afghan people, Caterers, TV executives, Beauticians, The Police. It premiered as a 4m 45s multi media piece on the prestigious FOTO8 website. Subsequently US Newsweek published the reportage across four pages paying around $1600. I decide not to mention selling, as a student, a portrait of Sir Richard FitzHerbert Baronet, Squire of Tissington for £25 to Derbyshire Life & Countryside. Asef is exceptional and may be the exception. I navigate the 30+ Macs in the digital suite looking for his antithesis. The Macs only have Photoshop installed. Social networking addicts must vacate. Over the shoulder of one student I spy images of a stunning model. I introduce myself to Rokas Darulis. The model is his girlfriend, who is a model, ranked among the top 50 models in the world. Lithuanian-born Darulis, who wouldn’t look out of place on the catwalk, graduated from MU in 2009 with a first. In a year working as a pro, commissions from Magazines Pravda (in Lithuania), Monika and Tank are casually referred to. Elite Model Agency and Svyturys Beer tick the commercial client box. Accolades already on the shelf include the AOP Open Awards and Taylor Wessing. Aha! one of the years MU inclusions. I flick through the brochure and find the entry Ernest and Ernest from his project; It doesn’t matter who you sleep with, a series of portraits of people of the same sex in bed together. A subtlety lit portrait portraying two of Darulis friends. I note ‘same sex relationships’ as a possible ingredient in the Taylor Wessing victory sauce.

I reflect on the projects from my University 'class of 95’. Roger photographed himself naked. Debra photographed herself nearly naked painted white. Sharon portrayed herself smoking a cigarette. Sarah chose a child’s plastic farmyard cow to document. Jane simply snapped the BBC Soap Eastenders playing on the TV. To be fair, Sarah went on to graduate from the RCA; Aperture has published a Monograph of her photographs. Debra is co-proprietor of a gallery in Brooklyn, New York. Perhaps the MU liberty statue pie flingers will end up chairing a World Photography Organisation while a Photojournalist like Asef will graft for recognition in a world of grant refusals and shrinking budgets. It’s a common tale.

Back at MU, Squiz, already a brand, (squizhamilton.com), shows striking work in progress from a self-funded 10 day fashion shoot in Japan. Estimated cost, a dedicated £2500. Tottenham resident Inzajeano Latif, a 31-year old mature student and graduate from the MA at MU, is also in attendance. Latif has already impressed picture editors finest Cheryl Newman with commissions for the Telegraph Magazine. Among other achievements, an Ian Parry Award Show Finalist, work featured in the FOTO8 Summer Show and D&AD Awards. The 2009 Taylor Wessing poster was Latif’s inclusion, Female Boxer Number 3. I scribble down, female boxers in bed together?

After being ejected from the digital suite a tour of further facilities follow. A historic smell permeates one room. Stepping in, through the amber gloom, over 30 traditional black and white enlargers morph to attention. David explains the importance of teaching the craft. He deplores the quick fix digital prints produced by students as if an afterthought. He encourages them to treat the process with the same develop, stop and fix precision you would an Ansel Adams landscape. David is constantly slowing people down. The frantic ‘shoot 1000’s of frames something must be good sort it out in Photoshop later attitude’ must stop.

It is not unrealistic to compare my experiences of 15 years ago. The principals of education remain the same. Equip a student with the necessary skills for a career in their chosen industry after education. I sped through my University doors with a First Class (Hons) Degree in Photographic Studies and headed for London. I would join Reuters (I’d seen a photograph I liked credited in a newspaper) and travel the world. The folio was lost in the Reuters system. Two years on the dole followed. I had no realistic concept of how to approach the industry. On reflection, my impressions are the lecturers were self-serving. Their own personal projects a priority. It is important for a tutor to have a profile outside of education but not at their students expense. Their efforts are still as bemusing now as they were then, Portraits of fish, found objects outside photographed inside, views on top and under a table. It was with a sense of the inevitable that our final year degree show was called Introspection. Academically the work of Jo Spence, Cindy Sherman and Nan Golding prevailed. It took me years just to remove the lens cap without feeling a misogynist. My dissertation on Dr Diamond and his use of photography in the treatment of female lunatics has not been useful.

It is with these concerns that I head to lunch with David. Over wine and calamari David explains how the course reflects the industry. Deadlines are non-negotiable, lateness an immediate markdown. Students are introduced into the industry as much as possible and Industry to the students. There is a healthy visiting lecture programme from retouchers and photographers to magazine editors and gallery curators. The only visiting lecture I remember was a philosopher who posed the question, ‘does green exist’? For two hours. It does. I seriously questioned if I wanted to. Internships and competition submissions at MU are compulsory. Assisting is encouraged. Tim Walkers’ assistant of five years, Alison Tanner, is on hand to advise. Rather than a ‘Jack of all trades’ approach to portfolios the strategy is to produce one substantial coherent body of work that the creator is passionate about. There is an open door policy from staff to students. The course is young and has already made a significant mark. David is realistic enough to suggest only 15% of graduates may go on to make a living taking photographs. Other employment opportunities within the industry are covered. Being a Technician is not considered a failure.

Back on Campus, David is keen for me to meet Steven Barritt (35) another MU MA graduate. I’m not so keen to meet Steven. The Taylor Wessing brochure introduces it’s protagonist as a product of the 'I photograph myself naked’ approach. Steven’s portrait The Solitude of Pygmalion from the series Analogous Mythography is based on the Greek myth of a sculptor who fell in love with his sculpture. Steven said: “I made a lot of effort putting on lots of weight and letting myself go, even resorting to not washing for weeks.” Essentially, a dirty Steven sits naked on an unmade bed surrounded by booze and with walls covered in posters and magazine articles on Britney Spears. I warm to him immediately. Steven wants to make enough money from photography to get out of London. He prefers the influence of Truro on his photography. His Anachronisms portrait series for his MA show are beautifully considered, meticulously planned 5x4 film portraits. It took him around nine months to shoot the first frame. That’s academics for you. Eight years discipline as a former computer programmer has left an imprint. Steve’s umbilical connection with MU has him lined up to interview for a teaching position.

All of the students I spoke with expect to hit the ground running as working pro photographers. They all have a print folio and eschew the argument for iPads. Cited influences are the ones that have shaped previous generations of snappers - August Sander, Bruce Davison, James Nachtwey, Walker Evans, Cecil Beaton. They speak fondly of their tutors and hope to retain a relationship with the University. We talk through the afternoon amicably as equals. Industry names are exchanged with familiarity. I even note down a few new ones. Social networking is understood and embraced. I consider myself a bit of a player ( 500+ Facebook friends!) and suggest they keep in touch. I leave them my card. There is nothing in the inbox when I get home, or the next day. I search them out. Squizhamilton has 4956 Facebook friends. I request to be his 4957th. Rokas Darulis 2365, most of them I assume beautiful. Inzajeano Latif, 1333. Steven Barritt, well at least he’s clothed in his profile photo.

Curious to find a few students not drafted in for my benefit and craving female company I peel off unescorted to the studio. It’s industrious and populated. A jewellery student sparkles on her back. Photo student Holly, fragrant clipped and sartorially crisp is setting up for a shoot, a series of portraits on red heads. A young man poses awkwardly on a stool. I make a note to remember his face, a potential Taylor Wessing 2011. Reminded of my pursuit of domination I show students the portrait prize brochures from the previous decade, pen poised to jot down the winning formula. Discussions suggest not much has changed. There was a bit more black and white. The dominating digital 35mm format has conquered the square but the content is constant; the ginger, puberty, teenage girls, nakedness, muff and combinations of all represented. Back at my studio, well The Villers Terrace in Crouch End, I re-assess my own successful entries, verdict - guilty: naked old man; a ginger woman on a urinating horse; two awkward looking children. Seems I’ve been entering content along the right lines all along. I have an idea for the next submission, pick up the phone and dial. “Hello, is that Anne Robinson?”