The Negativity of Winning

Voting is currently in session for the 4th Annual Photography Masters Cup, a global online awards show recognizing excellence in color photography. I hope the eventual winners have a more positive experience than I did. Arguably it's not one of the most prestigious annual competitions, one I'd not previously considered but a few things changed my mind. Looking at previous winners there were some quality shooters in the mix, Ziv Koren and Paul Hansen stood out for me. The entry fees looked a little restrictive but I respected many of the judges, a chance to put some new work under their noses and the prize didn't look too bad - $500 + publication in a book. More decisively I had some work I was particularly proud of after trips to Liberia, India and Egypt and decided to go for it. On March 23rd 2009 I received an email from respected Danish Fashion Photographer Anders Hald saying I'd landed 1st place in the Sports Category for a shot of football in Liberia, Anders had triumphed in Fashion, back slaps all round, let the winners ride begin. Or not. 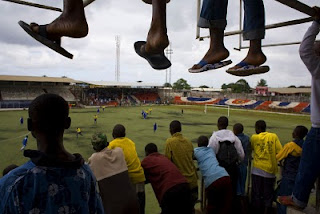 1st place Sport - Football in Liberia
2 months passed without instruction, I got in touch with The Color Awards who run the competition to ask how they expected to publish my image in a book if I hadn't sent them a highres file. They emailed details of the win, and details that I'd also had 2 images nominated which would also be required for publication. I uploaded the requested files. 4 months later I was asked to upload the requested files. I did so again. The deadline for receiving the winners cheque according to the entry terms & cons had well passed. The book was now downgraded to a magazine, a magazine that you had to purchase. With around 600 photographers published in the inaugural issue, a potentially tidy sum. I then received an email saying all winners could enter the 4th awards for free, the deadline for entries had passed. It's been a year since my win, the certificate's been filed, prize money received & spent. It's all felt rather shabby and winning has never felt so negative. I hope in time the competition flourishes and this years winners have an altogether more positive experience. I'm off to Cannes next week for the Sony World Photography Awards having been shortlisted for a prize in the Advertising Category. As a legacy of the Color Awards, a small part of me is rooting for the others shortlisted . . . but only a small part. 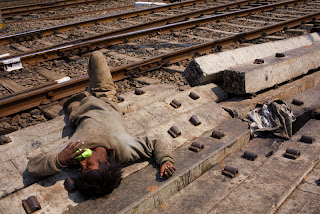 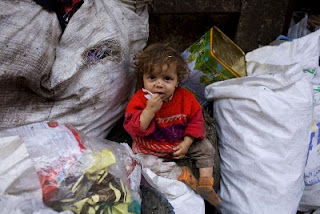 The Zabaleen of Garbage City, Egypt
Posted by Peter Dench at 01:44