In Conversation With Jocelyn Bain Hogg

Jocelyn Bain Hogg (JBH) is sweating. He reaches for a small bottle of Trumper's extract of lime and depresses a cooling mist. A polka-dot Paul Smith handkerchief is flourished from the pocket of his Adam of London suit to dab the beads from his lofty brow. I sip my can of Heineken. It's touching 28C in Le Couvent des Minimes, where we both have an exhibition as part of the 23rd Visa pour l'Image (VPL) festival of photojournalism held annually in Perpignan, France. I'm representing England; JBH, Wales and Scotland. (He has never felt English, ever, and admits to sniffling with pride watching the Royal Edinburgh Military Tattoo.) Together we are flying the exhibitor’s flag for Britain. Waiting to be interviewed for French TV, pleasantries are exchanged in the way that British men do. Our respective journeys to this privileged position has been very different. 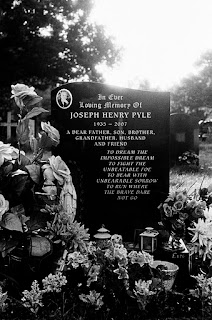 Solely his mother brought up JBH, an only child, after his adopted father died when he was a baby. The young JBH applied himself early to the theatrical, playing Robin Hood aged seven, and later winning the prestigious House Colours for his portrayal of Phyllis the Maid in the George Bernard Shaw farce, Passion, Poison and Pretrification, performed at the equally prestigious Lancing College (that he describes as a bear-pit). A youth of reciting Shakespeare and T.S. Eliot unravelled before unearthing his fathers old Rolleiflex persuaded JBH to turn his back on successful applications to the National Youth Theatre of Great Britain and the University of Oxford. Like many photographers before him, the Siren sounds of the click of the shutter and turn of the film winder had lured him to a lifetime behind the lens.

Five years his junior, while JBH, aged 18, was having his work published in Harpers and Queen and on the cover of the British Journal of Photography, I was still throwing chewed soggy paper to the ceiling of Mr Speedy's math class. Magnum Photos Agency photographer David Hurn, had already insulted JBH; a right of passage that would take me another 23 years. He advised JBH put his pretty pictures in a box and show them to his girlfriend. Perhaps Hurn played a hand in JBH’s unsuccessful application to Magnum. The criticism seems unabated. In 2010, at an exhibition of JBH’s project, Muse, at Third Floor Gallery in Cardiff, Hurn greeted him with the words, “Love the shirt, hate the show.” 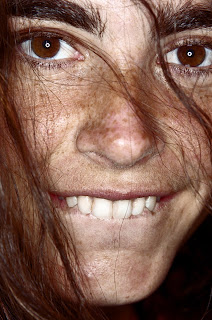 I first became aware of JBH attending my first VPL festival in 2002. I had a screening of my project, Drinking of England. On arrival, the talk of the town was still about the stately Brit who had entertained the crowds the previous year with photographs from his book, The Firm. First published in 2001, the work documented the criminal underworld, from exile in Tenerife to the broad spectrum of activity in the UK. Images of topless girls, gripped guns, grabbed buttocks, knuckle-duster neck chains and 6-inch cigars introduce us to the fierce world of the celebrity thug. The book has since become a cult classic. The question everyone asked was: How could this man, take these types of photographs?

The interim decade have seen our paths cross many times. We have briefly shared a commercial agent, exhibited at the same gallery, reciprocated nods across the dance floor at parties, bowed our heads at the funeral of Princess Diana and traded advice over email. Occasionally, I've been victorious competing on commissions; JBH has crushed my ambition for others. After a decade of friendly competition, a few weeks before the VPL festival we meet for a drink, to declare a truce and say, “Well done us, we are still doing it” and agree to form a coalition. I can't help thinking I've been allocated the Nick Clegg role.

Back in Le Couvent des Minimes, the television crew questions JBH; "Are you a gangster?" No. "Are you an expert on British crime?" No. “Did you constantly find yourself in danger?” No. "How does someone like you get to take these types of photographs?" The questions are understandable and the rumours are delicious. One recounts a man owed money, tired of waiting to be paid, presented the debtor with a copy of The Firm, indicating that he knew the author. The debt was immediately honoured. Another anecdote: A woman at her wits' end after the relentless bullying of her daughter at school asks if JBH’s ‘friends’ would be able to help? The bullying ceased.

I leave the French exchange and stride into JBH's exhibition. The first thing I notice is his contributor photograph, credited to fellow VII Photo Agency snapper, Seamus Murphy. A sartorially crafted JBH sits perched on a bar looking every bit the dandy, a cigarette dangles between the fingers. My contributor photograph is a self-portrait, urgently requested by the Dorset Echo, I had hauled myself out of bed hours after returning from assignment to Kirkuk, Iraq. The result is a baggy eyed, unshaven Dench, with what looks like an enormous Mohican.

The claustrophobic sweaty room suits the content of JBH’s photographs. Big men tilt their big shaven heads for whispered conversations in Knightsbridge bars. Jewels sparkle, caught in the cut-through-the-dark ring-flash. Personalities clash, the clothes are brash, men snort coke through cash. Women touch tongues and tattoos tell tales of gangs. The images are from his new project, The Family; IT IS NOT A FOLLOW UP TO THE FIRM! 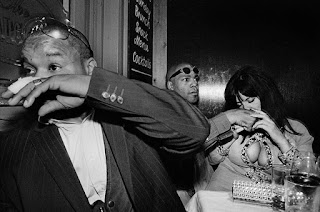 The VPL press office is working us hard. In between my own dense itinerary, I try to catch up with JBH for an interview. I turn up for scheduled talks of his that he hasn't and stand alone as others are rescheduled. Journalists text me to ask if I’ve seen my British chum. We cross paths briefly in Cafe de la Poste, the unofficial festival HQ for a few grabbed words over Pastis. At one point during the week, he kicks me up the backside and I capture video footage of him calling me a w****r. The cracks in the England, Scotland-Wales coalition start to show and the sparring is welcome.

Back in London, battered but not beaten, I recoup, regroup, and head down to the home of photojournalism, the offices of Foto8 near Old Street in London. How lucky am I? The home of photojournalism, just down the road from where I live. It could have been in Nantucket; or worse, Grimsby. I'm meeting JBH at 3pm and have arrived early to look at a PDF of the The Family and chat with Foto8 director, Jon Levy. I ask the question. "How does this man take these types of photographs?" Levy explains: “It's the demeanour of JBH, he's not trying to be someone he isn’t, the bon viveur, pushy-in-a-good-way, Errol Flynn character of our day you see, is the man you get.”

JBH arrives around 4pm after a prolonged meeting with his bank manager and folds himself into a chair. The anthropologist explorer of British society explains the villains of The Family are guys who just know who they are and they don't mind being photographed; the police already know who they are. If The Family is not a follow-up to The Firm, the style certainly is. The continuation of grainy black-and-white pictures delivers the feeling of a sequel. Given the opportunity for a career in movies as a young man, JBH had opted for stills photography; his “Passport to move freely and document the world without the intervention of camera crews, set designers, bulky equipment and, above all, the necessary contrivance of film-making.” With the development of lightweight HD video cameras, would JBH now consider shooting footage? He would, but this would not have been possible shooting The Family, those silent conversations caught by the stills camera, need to remain just that. 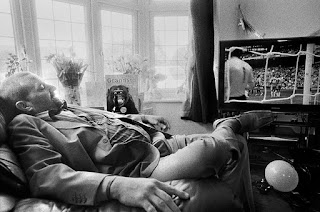 The images in The Family, introduce us to the world of villainy post Joe Pyle Snr. Pyle, from South London, was the head of a crime family who counted the Kray twins among his friends. He died of motor neurone disease in 2007. The work documents the four ‘brothers’ bequeathed the Pyle Snr. crime patch; where these scions of the Pyle family compete with international gangs and comply with others to maintain their heritage. Along with images of paying respect at the cemetery, wakes, communions, and unlicensed boxing matches, we find the protagonists relaxing at home in suburban Surrey: watching Chelsea on TV, fooling about with the kids, playing basketball in the yard. Photography is JBH’s family and books his children. Books matter, they are lasting; his legacy. They make a statement. Two more books are planned for 2012. The joke is that if The Family isn’t published before Christmas, JBH would not be celebrating it; but no one seems to be laughing. I lighten the mood and suggest that Foto8, who will publish the book, release the slogan, “Publishing books, saving lives”. But no one seems to be laughing. Back home, I check my bank balance, Christmas list, and pencil in for all my friends and relatives, 'a copy of Jocelyn Bain Hogg’s The Family'.

Dench Diary, in conversation with Jocelyn Bain Hogg from Peter Dench on Vimeo.

Copies of The Family is available to buy from Foto8 publishing including limited editions.

A version of this feature first appeared in issue #2 of Hungry Eye magazine, copies available to buy here.
Posted by Peter Dench at 00:10